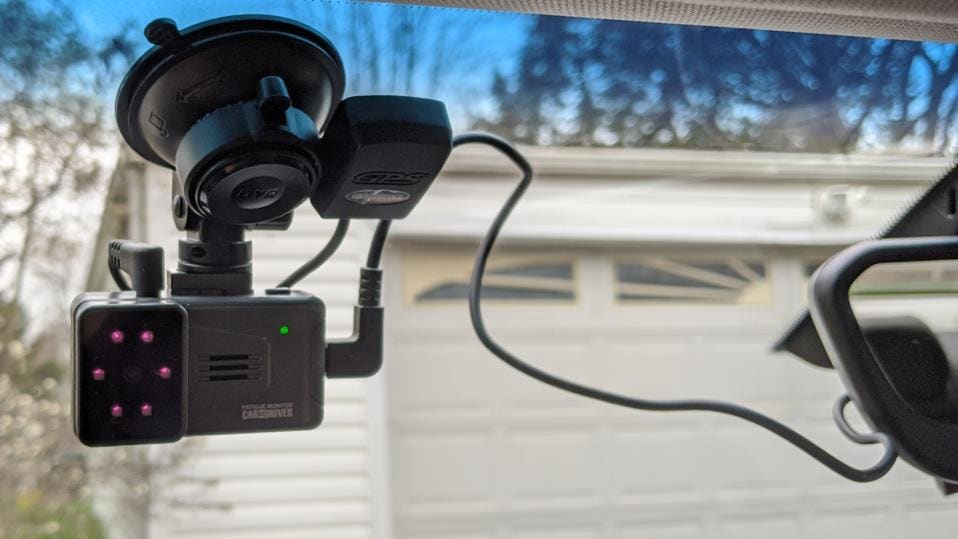 There’s little question that distracted or drowsy driving is a serious problem. Drivers that are unable or unwilling to commit full attention to the task of driving pose a real risk to themselves, their passengers and anyone around them. Someday, highly automated driving will hopefully fix this by taking the human out of the driving loop. Until that day arrives, we’ll have to make do with reminding people to focus either directly or via technology. A new tech solution has just arrived in the form of the Car and Driver Copilot.

The Copilot is an aftermarket driver monitor device made by the Fesco Group, You’ve probably never heard of the Fesco Group, but there is a pretty decent chance you’ve seen and probably even their products which are sold under multiple brand names including Coby audio gear, ChargeWorx cables and power banks and of course Car and Driver dashcams.

The Copilot is the first of Fesco’s Car and Driver branded products that’s designed to face back into the car rather than looking out at the road ahead. It looks kind of like a dashcam but it can’t actually record anything. Instead it features six infrared emitters and an IR camera that monitor the driver’s attention.

It functions in the same way as the driver monitor system that is part of General Motors’ Super Cruise driver assist system or the Face ID system on recent iPhones.. The IR emitters light up the driver’s face and the camera looks for the position of the face and eyes. Using infrared allows the system to see the eyes even through polarized sunglasses.

As long as the driver is watching the road, all is good. However, if that attention wavers, the driver gets a loud audible alert. Installation of the Copilot is very simple, it has an integrated suction cup mount so you can put it on the windshield.

This is actually the first drawback to the system. It has to be mounted midway between the A-pillar and and mirror, directly in front of the driver at the top of the windshield. I installed it for testing in a new Genesis G70 sedan. The G70’s sleek design also means the top of the windshield is comparatively low compared to a large SUV or pickup truck. As a result, the device is always hanging there in your field of view while driving. In a vehicle with a taller windshield it might be less obtrusive, but in any smaller vehicle, it’s hard to imagine how this device would ever seemingly be forgotten.

Factory installed driver monitor systems (DMS) can be much better integrated. The Super Cruise DMS has its emitters in the steering wheel rim and the camera is a small bump on top of the steering column. BMW has a similar system in the new 3 series that is embedded in the top of the instrument cluster. No aftermarket system is ever going to be that clean although hopefully future systems can be smaller. Another issue with the Copilot is that it prevents use of the sun visor.

Power for the device comes from a USB cable that is packed in the box along with a USB 12V adapter that can be used if the vehicle doesn’t have integrated USB ports. In addition to the camera and emitters, the device also has a built in GPS receiver. Because the Copilot isn’t tied into vehicle systems, the GPS is used to determine when the vehicle is in motion so that it doesn’t give any alerts while standing still.

Aside from the packaging issues, the system actually works exactly as advertised provides the right sort of functionality. Driving down an empty road with the G70’s lane centering system activated after installing the Copilot, I deliberately looked off to the side as if fixated on something in the passenger seat. After about 3-4 seconds, the Copilot gave me a loud audible alert to please watch the road. As soon as I returned my gase to where it belonged, the alerts stopped.

My second test involved closing my eyes for a moment as though I was drowsy. In this scenario, the device took less than one second to respond. The difference in detection time was likely due to the assumption that while looking to the side, I at least had some peripheral vision on the road. With eyes closed, that’s not possible so the system is much more aggressive. I wear polarized sunglasses while driving in the day time and the system worked the same with glasses on or off.

Today, active DMS is only used as part of high end driver assists like Super Cruise or the second generation of Nissan’s ProPilot Assist. But in the next few years, automakers are expected to start installing similar systems much more broadly and they won’t have visibility concerns of the Car and Driver Copilot.

The system works remarkably well and for existing vehicles without factory installed systems, it’s a great solution if you can live with it hanging in front of your face. However, right now, I have a hard time recommending it for most people because of the packaging. If you are a professional driver, especially one driving something like a van or  larger truck all day, you may find it less obtrusive. Fleet operators with these sorts of vehicles may find value in installing these devices.

The Copilot can be a great coach to train yourself to keep eyes on the road and perhaps that is the solution for other drivers. Install and use it until you find yourself no longer getting alerts. When that happens you can take it out and then just put it in periodically to make sure you still have good habits. Hopefully a future iteration of the Copilot will have a smaller, more discrete package that you can just leave in place.

The Car and Driver Copilot is now available at NAPA Auto Parts stores for $199.